Their headquarters have changed several times, but is now currently headquartered in Omaha, Nebraska, which is near North Platte; home of Bailey Yard (named after former UP president); the largest railyard in the world, which is actually a combination of 5 or 6 different classification yards.

Their arch-rival is the BNSF Railway, which covers most of the same trackage.

2012 marked the official 150th anniversary of the railroad.

The railroad was first officially established in 1862 as the Pacific Railway (chartered by the Pacific Railway Act signed by president Abraham Lincoln) which was once one of the smallest US Class 1 railroads, though the railroad began to connect with the Central Pacific from 1861 (before becoming the Southern Pacific) to May 10, 1869 at Promontory, Utah, forming the first transcontental rail line. The actual Union Pacific name for the railroad was established during the events of the ceremony, but wasn't officially chartered until 1880; to whom it was established after what was left of the original Pacific Railway, yet it wasn't so small after the first ever transcontinental railroad line was built in the United States, connecting the Central Pacific (which eventually became the Southern Pacific; as mentioned above) and the Union Pacific across the Western States or West Coast in the US with half of the East Coast. The Pacific Railway was established sometime during the 1860 to 1861 (shorty before the Civil War began the following months during 1861, but during the events revolving around it) under the "Pacific Railway Act" documented by former U.S President Abraham Lincoln. Little is known about the railroad's early history, other than the historical events themselves.

Their first locomotives to ever operate, were 4-4-0 American Standard steam locomotives. One, however, is famous due to being celebrated with the "Golden Spike" event for the opening of the first transcontinental railroad.

No. 119 is the one who's well-known and famous; being painted in an exclusive scheme and name which began the railroad's official name, but originally served as a "union" or "joining" of rail lines: thus, the Union Pacific name was born in 1869, during the Golden Spike Ceromony. The locomotive, however, was scrapped during the early 1900s, and a replica was built.

As the railroad grew into the 20th Century, many changes began to occur. Such as rapid passenger service, route expansion, and high freight demand. But because of these changes, locomotives such as the streamlined M10000 internal-combustion (gas-powered) diesel trainset, and the UP Class 9000 hybrid steam locomotive were built to adjust to such changes.

During the turn of the Cold War Era around 1949, the UP purchased and absorbed several small shortline railroads which once delivered freight to the UP; but took over operations due to the shortlines proving to be unnecessary.

End of the Steam EraEdit

Eventually towards the End of the Steam Era during the 1950's to the 1960's, the railroad unfortunately was forced to sell, retire, and scrap most of their beloved steam locomotives due to their cost, maintenance, and reliability. Hence, there only being one survivor who was never retired, UP 844; an ALCO FEF-3 Class 4-8-4 steam locomotive.

As freight railroads began to merge, grow, and sadly become bankrupt during the late-1960s throughout the 1970s, the Union Pacific began to compete with their former arch-rival, the Southern Pacific railroad over freight service. Both railroads originally "shared" their Pacific Fruit Express trains with the Western Pacific railroad, but the three railroads began to compete over trackage, freight, and passengers due to the rail economy being endangered during the 1970s because of trucking slowly replacing railroading. Hence, EMD building their largest diesel locomotive; which is also the largest ever built in history; the EMD DDA40X. A large, twin-engined, eight-axle, 6,600hp diesel locomotive, which became an instant success, and the downgraded DD35 was also built to be compatible with the Southern Pacific's large fleet of EMD GP35 diesel locomotives.

(The UP also experimented with energy-efficient diesel locomotives from 2007 to 2011 as well; such as using the PR43C from Progress Rail.)

Due to the formation and creation of CSX, Conrail, and other merged railroads as a result of financial bankruptcies and evolution, the Union Pacific began to purchase several US Class 1 railroads which covered or connected to their routes and once competed. They purchased the railroads, due to them being financially debt (or were losing money and customers).

Union Pacific has also recently had their first fleet of EMD SD70ACe diesel locomotives painted in heritage schemes to become known as "heritage units" to commemorate the purchase of historic, iconic, and legendary US Class 1 (major) railroads.

Union Pacific currently operates over 4,000 trains per day, and has over 50 railyards (20 which are major) and still even have former SP, D&RGW, SSW, and CNW painted units or locomotives still in their original paint, yet most are "patched" with the UP logo and lettering, while some are still unpatched; yet only former SSW, SP and only 2 CNW locomotives still have their original numbers and aren't "patched".

But because of the successful mergers, the railroad eventually grew and has become the main freight railroad in the US.

They also have, and have had sponsored diesel locomotives for Breast Cancer, Operation Lifesaver, The World Olympics, The US Military, and even US Presidents.

There is also a fleet of preserved locomotives and rollingstock owned by the railroad as well.

Several ALCO 4-8-8-4 4000 Class "Big Boy" steam locomotives are also preserved, yet only one is owned by the railroad, while money was donated to restore others.

From 2005 to 2007, Union Pacific painted brand-new EMD SD70ACe diesel locomotives in heritage schemes to commemorate railroads that they purchased which still existed, and the "heritage units" were numbered after the year that the specific railroad became defunct.

One of the preserved UP Big Boy locomotives. 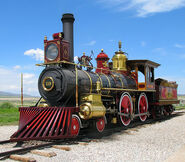 This locomotive was built by the Taunton Locomotive Manufacturing Company in July of 1868, and was one of the earliest steam locomotives owned by the UP.

UP AC4400CW #9999. This particular unit briefly retained such number before becoming 6702, and was also one of the first three original AC4400CW units ordered and purchased by the railroad (excluding their earlier Dash 9 fleet, which all were eventually converted and most renumbered.)

Typical UP fleet during the 1960's which consists of an EMD SD40, SD40 with a "snoot nose", and a GE U50 unit. (Notice the various slogans applied to the sides of the unit's cabs.)

UP No. 4466 is on static display at the California State Railroad Museum.

UP No. 428 is under restoration at the Illinois Railway Museum

UP #1848 a GE B40-8 operates at the Illinois Railway museum.
Add a photo to this gallery

Since the 1930's, Union Pacific's locomotives have been painted in various different styles of their grey and yellow with red outlining Armor Yellow scheme; with most of their earlier steam locomotives (aside from their 4-4-0 'American Standard' units) painted into grey, white, and black schemes that most average American steam locomotives had. (The grey, black, and white schemes were once used to hide ash, dirt, soot, and grime around steam locomotives.)

Their logo and slogans have also varied as well. Such quotes from the slogans include: "We Will Deliver", "Building America", "We Can Handle It.", and "Road of the Challengers".

They currently paint american flag emblems, "winged" shields, and/or "lightning bolt" red outlining on most newer or repainted locomotives or units (besides their "Building America" slogan).

Retrieved from "https://locomotive.fandom.com/wiki/Union_Pacific_Railroad?oldid=80578"
Community content is available under CC-BY-SA unless otherwise noted.