Start a Wiki
Nacionale de Mexico No. 2708 is an NR-1 class, 4-6-4 "Hudson" Type steam locomotive built by Alco in 1937 for The Ferrocarriles Nacionales de Mexico - or Mexican National Railways.

The NdeM used this locomotive for most of its modern passenger services.

It was also assigned to the Aguascalientes – Irapuato mixed trains 237 and 238 until replaced by diesels in 1963 when it was retired.

It is now a static display at the Plaza de las Tres Centurias - Railroader's Museum.

No. 2708 Operating on the Nacionale de Mexico railroad.

The sideview of the locomotive 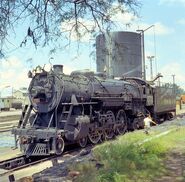 No.2708 resting
Add a photo to this gallery
Retrieved from "https://locomotive.fandom.com/wiki/Nacionale_de_Mexico_No._2708?oldid=81833"
Community content is available under CC-BY-SA unless otherwise noted.