Built as part of the K-4-a class of Pacific types for the GTW, No. 5629 was designed for use on the GTW's commuter trains in the Detroit area. In its later years of service on the GTW, the locomotive pulled numerous excursion trips hosted by local railroad clubs and the GTW.

Retired in 1959, No. 5629 was placed in storage at Durand, MI. In 1960, it was sold to Richard Jensen of Chicago, IL for approximately $9,540.40, the scrap value of the locomotive at the time. No. 5629 was subsequently moved to a spur track in Hammond, IN that Jensen had rented from the Grand Trunk. There, Jensen and a group of local railfans worked to restore No. 5629 to operating condition for use on fan trips around the area.

Steamed up for the first time in October of 1961, No. 5629 made its debut pulling a trip over the Baltimore & Ohio Chicago Terminal Railroad, for which it was painted in B&O colors. After pulling several more trips on the B&OCT, it was invited to run a trip over the GTW between Chicago and South Bend, IN in the summer of 1966. Shortly before the run, Richard Jensen traded its original tender to a local scrapyard in exchange for a larger tender from a Soo Line 4-8-2. The new tender allowed for more coal and water to be transported which meant the train did not have to stop as often to replenish its supply.

The first Grand Trunk Western trip proved to be a big success and over the next few years, No. 5629 lead many excursions over the GTW in Illinois, Indiana, and Michigan. In 1967 and 1968, it traveled to Baraboo, WI to pull the Circus World Museum's Schlitz Circus Train.

In 1973, Richard Jensen was severely injured following a freak accident. Unable to run the locomotive, it was placed in storage at the Amtrak yard near Union Station in Chicago while Jensen was hospitalized. After he was released from the hospital, Jensen began planning another excursion trip but it never happened due to financial troubles.

In the late 1970s, Jensen moved No. 5629 to the Rock Island Railroad's Burr Oak Yard in Blue Island, IL. Around this time, the Rock Island was on the verge of bankruptcy, and in March of 1980, the railroad shut down for good. Burr Oak Yard was sold to Metra Commuter Rail of Chicago, who asked Jensen to relocate the 5629 so they could build a new car shop where it stood. Unfortunately, the locomotive had been vandalized over the years to the point where it was unsafe to move. Metra told Jensen that he could move it to a nearby connection with the Iowa Interstate Railroad but they would not assist him in moving it. In failing health, Jensen was unable to do so and took Metra to court. The judge ruled that if Jensen could not move it, Metra would be allowed to scrap it.

Word of the 5629's endangerment spread through the local railroad community. Several groups including the Illinois Railway Museum and the Mid-Continent Railway Museum stepped in to try and save it, but soon realized it would be too costly since it could no longer move on its own wheels. Knowing that the locomotive was indeed going to be scrapped, Jensen and his friends took parts off of it and gave them to local railfans. Many of these pieces, including the bell and headlight, survive today in private collections around the country.

Metra contracted with the Erman-Howell Division of the Luria Brothers scrap company to dispose of No 5629. Scrapping began on July 14, 1987 and was completed by July 17. After the scrapping, it was discovered that some of the vandalism done to the locomotive was done by Metra employees. As a result, nine employees were fired from Metra and Jensen filed a lawsuit, but lost.

Today, sister locomotives 5030 and 5632 are on display in Michigan. 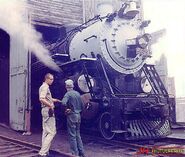 No. 5629 being scrapped at Blue Island, IL on July 14, 1987. Tom Golden photo.
Community content is available under CC-BY-SA unless otherwise noted.
Advertisement