This is Locomotive Wiki's {{#NewWindowLink: wiktionary:glossary#English| glossary.}} Please refer to this page for definitions of technical terms that appear in articles.

See the /Manual for information regarding the editing of this glossary, as well as production history.

This is an explanation of the Interface. On the image below, click anything you wish explained.

Opens the editor at that letter's section.

The "primary" section for the letters of the alphabet.

Click these to get back to the alphabet table of contents.

Mini table of contents — lists all definitions under that letter.

A definition in the glossary.

Links to an article elsewhere on the wiki that is devoted to the definition.

If applicable, these sup-headings break up the definition so it's quicker to get motive-power specific information.

All links in small-caps relate to another definition in this glossary. All other links point to a different page (usually on this wiki).

The actual definition of the term.

For various reasons the definitions in this glossary are under the most common term only, for example we use US terminology. This is essentially a redirect to another term. 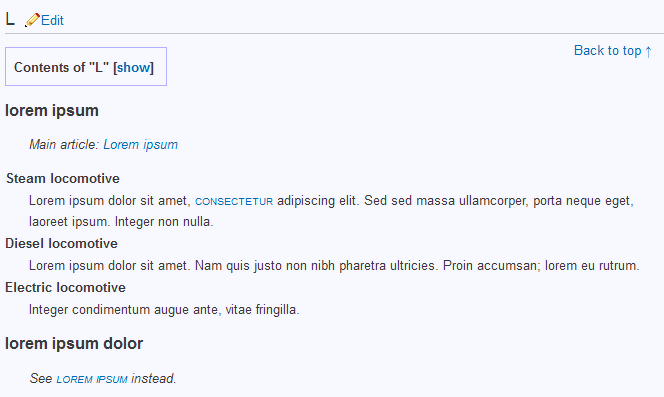 An axle notation system used by the USA in particular, and works as follows: A powered axle is shown by a capital letter, e.g. A = 1, B = 2 and so on; non-powered axles are represented by a number; trucks are separated by a hyphen "-"; and articulated chassis are denoted by a plus sign "+".

The amount of grip a locomotive has on the rails. In certain conditions, e.g. wet weather, this may be reduced.

Where the frame, or set(s) of driving wheels, pivot to help a large locomotive navigate sharp curves.

A spindle that joins a pair of wheels.

Allows an axle to rotate freely via bearings.

A part, usually metal, made out of rolling or sliding pieces that is fitted between moving parts to reduce friction, thus slowing wear and tear.

A pipe through which exhaust steam travels from the cylinders of a steam locomotive to be exited through the chimney. Blast pipes are located inside the smokebox.

Non-structural panels attached to a frame in order to provide weather protection for equipment and crews. May also be added for aesthetics or streamlining.

A large drum in a steam locomotive that is filled with water and boiled to create steam. The steam then propels the locomotive.

A lever that an engineer of a locomotive can use to slow and/or stop a train. These can be found in all popular types of locomotive or multiple unit.

Piece of material that is pressed against a rotating object to slow an axle.

An arch of firebricks inside the firebox that funnels the hot gases evenly into the flue tubes.

The place where the engineer can sit and operate a locomotive or multiple unit.

Part of a braking system. The caliper squeezes brake shoes onto a rotating brake disc (or the wheel itself) to slow and/or stop the train. This type of braking system is not favored as running brakes on modern equipment, instead dynamic braking (where traction motors exist) is used to avoid running costs and brake fade.

Strictly, this describes the overhead cable that is strung between supports in a curve, holding up the contact wire that carries current for electric locomotives and EMUs. In common use, this term refers to all the wires, span cables, gantries etc. that completes an overhead power system.

A vent to allow exhaust gases to escape a steam locomotive.

A metal bar usually used in pairs to link the driving wheels together on each side of a locomotive. Used solely for when only one axle is powered.

A wooden or metal cage-like structure on the front of a locomotive to move animals of the tracks.

The cylinders of a steam locomotive create a beat or pulse when they force exhaust steam through the blast pipe(s). This may have a negative flow-on effect to the firebox.

Braking system where friction is used to slow the vehicle. The rotor(s), connected to the axle of vehicle, are squeezed by a caliper to cause the friction which is actually the force of the vehicle's momentum converted into heat.

Where two locomotives pull a train from the front. Usually in reference to steam locomotives.

In British English, the person who drives the locomotive. See also, engineer.

Alt: drivers. (Not to be confused with driver.)

One of at least two wheels powered by a locomotive to achieve motion.

System that switches traction motors from consuming power to generating power. Then, the motion of a locomotive is transformed into heat by rheostats and expelled into the atmosphere. Very efficient form of braking that reduces wear and tear on service brakes, and avoids brake fade. Ceases to work effectively below a certain speed, usually about walking pace, therefore locomotive still requires service brakes.

A machine designed to create power, typically to achieve movement. Usually done by producing rotating force. May be used to describe an entire steam locomotive; rarely used in such way in relation diesel locomotives due to confusion with the diesel engine. See also, Diesel engine.

Place in a steam locomotive where fuel is burned creating heat to boil water in the adjacent boiler.

Chiefly British form, or archaic form, of engineer. Is still in use for stokers of steam locomotives in Britain.

The escape route for exhaust gases from the firebox through the boiler. Multiple flue tubes are used to heat the boiler up evenly.

The place (floor) from where the driver and engineer operate a steam locomotive. Is sometimes used as a synonym for running-plate.

The metal plates or bars that form the basis of a locomotive or other rail vehicle, onto which the body is attached.

The distance between the rails a locomotive runs on.

Type of steam exhaust system, designed by Adolph Giesl-Gieslingen, which has multiple blast pipes fanned out to feed a long, flat chimney. The design improves fuel consumption and increases power.

Using fluid pressure to operate something.

Steam locomotive
Used to get new water from the tender into the boiler by fighting the pressure within.
Diesel locomotive
Sprays fuel into a cylinder.

Describes a steam locomotive that has the cylinders placed underneath the firebox.

Where two, or more, tracks are linked so that vehicles can transfer from one to another.

A rail vehicle that propels itself.

Abbreviation of "magnetic levitation"; the process of supporting a locomotive on magnetic fields.

Chiefly British form of engine, or a traction motor.

A train made up of units that each have motors, or diesel locomotives coupled together. Either way the entire train is controlled from one cab, and by one engineer.

Type of steam locomotive that has the frame on the outside of the wheels and running-gear.

Describes a steam locomotive that has cylinders placed on the outside of the wheels.

An arm that holds a wire against a live cable above the track. See also, catenary.

A cylindrical plug that moves back and forth inside a cylinder.

Double-ended piston that moves inside a steam chest administering steam into and releasing steam from the cylinders of a steam locomotive. See also, valve.

Process in a steam locomotive where water is carried into the cylinders, as a result of using low-acidic water.

Used in parallel pairs to form a section of track, which the locomotive rolls on.

Component that slows down an electric circuit. It so works by converting the current into heat.

A rheostat is a resistor that is adjustable. Used in dynamic braking on modern locomotives and multiple units.

A valve that opens when pressure inside a boiler gets too great.

A locomotive's standard brakes which operate via air pressure (or even cables). Prone to fade at high speed.

Strip of wood or concrete that supports rails that are placed on top. Major part of a track.

Place, usually at the front, in a steam locomotive where exhaust is mixed with steam and sent out the chimney.

Compartment within a steam locomotive which fills up with steam awaiting entrance to the nearby cylinder via piston valve or port.

A locomotive that, via firebox(es), boiler(s) and cylinders, achieves movement due to the expansion properties of steam.

A steam locomotive that does not use a tender, but instead uses integral bunker and water tank(s).

A wagon that carries fuel and water for a steam locomotive, usually placed behind the footplate.

A protective ring that is fitted around a locomotive's wheel. The tire wears, and is eventually replaced, allowing the wheel to be longer lasting.

A pair of rails used to support and guide a locomotive.

Where three locomotives pull a train from the front. Usually in reference to steam locomotives.

A swiveling frame that carries axles on many steam, diesel and electric locomotives; the truck helps to guide the locomotive around corners. Elsewhere than North America these may be referred to as bogies.

Either one locomotive, or one car in a multiple unit.

Hole that opens and closes allowing the passage of fuel or steam.

Levers and rods that link the valves to the piston's movement on a steam locomotive.

An upright, metal panel placed forward of the footplate on early, or cabless, steam locomotives in an attempt protect the driver and fireman.

The order of carrying and driving wheels on a locomotive; usually in a notation.