After the success of the AC4400CW, GE decided to expand their success of AC-traction diesel locomotives by developing an even greater advantage by having a single-engined type of diesel locomotive be capable of providing high amounts of horsepower (from up to 5,500hp or more), in turn reducing the need for multiple units on a single train. Hence, the development of the AC6000CW during 1997 (with the prototype developed the previous year): a revolutionary type of single-engined, or standard diesel locomotive capable of generating such high amounts horsepower and be AC-traction powered with having such motors provided to do so (besides the SD90MAC); as well as having more advanced microprocessor controls. The HDL prime mover was co-designed by Duetz of Germany and GE.

Though capable of having such features, the AC6000CW (like its rival) wasn't fully developed. The 6,000hp 7HDL-16 wasn't completed in-time during the unit's introduction, and customers (with Union Pacific being the first) were purchasing such units with 4,400hp as opposed to having their exclusive 6,000hp engine. Hence, the 6,000hp engine was offered; but unavailable during the early years, and was simply replaced with a standard 7FDL-16 type of 4,400hp engine. Thus, the early AC6000CW units being dubbed "convertibles": a type or model of diesel locomotive capable of being fitted with different parts or engines able to easily be modified. No convertables delivered with an 7FDL-16 prime mover were ever upgraded.

They were originally built to compete with the EMD SD90MAC shortly after its introduction in 1995.

Union Pacific and CSX were the only US railroads to purchase the AC6000CW. Southern Pacific had 3 AC6000CW's on order at the time of its takeover by Union Pacific. UP changed the 3 unit order to UP class C4460AC convertibles similar to those which were already on order. Outside of the US, BHP Billiton used these locomotives for hauling iron ore. They some have been repowered with GEVO16 prime movers.

All of CSX's full production model AC6000CW's have been repowered with GEVO-16 engines. Pre-production units #600-602 recieved 4400hp 7FDL-16 engines, essentially turning the units into AC4460CW "convertibes" similar to those ordered by Union Pacific.

During 2014 the 7 remaining BHP Billiton AC6000CW's were retired and sold to a scrap dealer. All had been cut up by the end of the year. An eighth unit was previously retired and scrapped after suffering major accident damage.

In 2019, the Western New York & Pennsylvania Railroad, traditionally known for operating an entire fleet of ALCo engines, picked up eight AC6000CWs from Progress Rail. Two of the units were purchased for parts, while the remaining six will be delivered in full WNYP dress and used in regular service.

The main way of distinguishing them from other GE units, is by the distinct extended radiator fin, which also has a hump; aside from one side of the frame being slightly elevated where the air tanks are located (with the airtanks being different as well.) 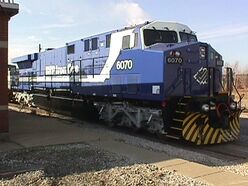 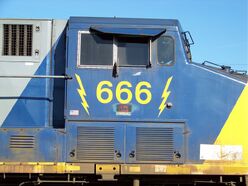 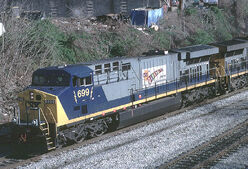 One of CSX's six "Diversity In Motion" AC6000CW units. 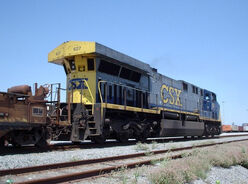