The EMD/Progress Rail SD70ACe is a six-axle, 4300- horsepower, AC-traction diesel locomotive which was first introduced in 2004, and was produced from 2005-2015. The SD70ACe is no longer in production in the United States due to its EMD 710 engine's failure to meet EPA Tier 4 emissions regulations.

The EMD SD70ACe was born out of necessity, with EPA Tier 2 regulations off in the distance EMD had to design a new locomotive to meet these standards. The SD70ACe and its variants have sold thousands of domestic and foreign units since 2004.

On January 1, 2015, the EPA's Tier 4 emissions regulations went into effect, making it illegal for EMD to continue production of the SD70ACe as it was. Although EMD had initially thought their 710 prime mover would be able to meet Tier 4 standards, it failed to do so. EMD pressed on the the development of the SD70ACe-T4: a tier-4 compliant SD70ACe.

Despite the new Tier 4 regulations, railroads can bank their credits built up with EMD to acquire Tier 4 credit (T4C) locomotives. Union Pacific has done this, ordering additional SD70AH's in the 8997 - 9096 number range. Additionally, Norfolk Southern went back to EMD in 2018 for 40 T4C ACe's, which will be numbered 1175 - 1214).

EMD displayed its SD70ACe-T4 demo unit at the Railway Interchange show in Minneapolis. This unit is related to the SD70ACe only by a name. The unit features the new EMD 12-cylinder 1010 prime mover (vs the 16-710), producing 4,400 hp, in addition to a restyled (non-iso) cab and new HTCR-6 lighter-weight trucks. EMD plans to have 5 demos testing on the Union Pacific by the end of this year. Full production is set to begin 2nd Quarter, 2016. Union Pacific is the launch customer for the SD70ACe-T4; it placed an order for 65 units due at the end of 2016, the first of which, no. 3013, was delivered in early November of 2016.

Although it is a successful type of locomotive, the EMD SD70ACe has experienced several defects, mainly with the cab. Despite having a unique design, the actual design often made it difficult to maintain the writing and access to the microprocessor components at the beginning for railroad employees. BNSF has relegated its 70 SD70ACe's that are not IsoCab to the state of final unit only. After the collision in Red Oaks, Iowa, which caused the death of the train crew aboard an SD70ACe, BNSF detected that the cabin can be separated and flattened in collisions. To date, there have been no redesign changes.

The main way of distinguishing an SD70ACe from an SD70M-2 is by box on the left side of each unit, with a SD70ACe having louvered vents - on the SD70M-2, these are plated over. There is no significant difference in external appearance between an SD70ACe and an SD70ACe-P4, except for the missing traction motor on the axle closest to the fuel tank on the P4 model.

Another CN SD70ACe-P6 operating as a DPU. Photo by Marshall W. Beecher

Norfolk Southern 1077 a SD70ACe at Chesterton IN. Photo by: Andrew Sonkin

Union Pacific 8991 is running as a DPU on the rear of an eastbound stack train at Cheyenne, Wyoming in October 2015. It is classified as an SD70AH which is the heavier version of the SD70ACe. Photo: Michael Tolich 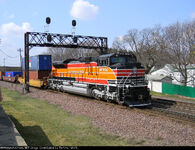 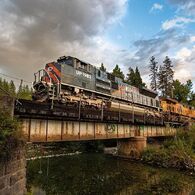 Union Pacific SD70ACe #4141 "George Bush 41"
Add a photo to this gallery
Retrieved from "https://locomotive.fandom.com/wiki/EMD_SD70ACe?oldid=86364"
Community content is available under CC-BY-SA unless otherwise noted.