Many still exist, in service on various commuter railroads. However, Amtrak retired their F40PH locomotives in 2003. Only their NPCU conversions remain on the roster, with eight other F40PHs stored on Amtrak property.

The GE Genesis series (aside from the EMD F59PHI for commuter service) serves as its initial replacement for revenue passenger service, though these will be replaced themselves by the Siemens ALC-42 Charger.

In 1971, after Amtrak was formed, it initially inherited a fleet of first generation (E and F-units) from the predecessor railroads it took passenger service over from, with much of it in need of replacement. Two types of locomotives were immediately recognized; One of them a six-axle unit equipped with large fuel tanks and water reserves, to be used for long-distance journeys. The other one, a smaller, lighter, and faster unit, equipped with HEP, and meant for service on Corridor routes in the Midwest and the Northeast.

Of the two types, the first was considered a priority. EMD won the contract to supply what would eventually be 150 units of what would be called the SDP40F. They were delivered in 1974.

The second type, the EMD F40PH, first entered service in 1975, initially on the short distance and regional train services.

Shortly after the SDP40Fs were delivered, however, there were a number of derailments on trains pulled by those locomotives. These trains were subsequently forced to slow down in curves, throwing long-distance schedules out the window. The causes were later traced to the lightweight baggage cars, which caused vibrations when placed behind the much heavier SDP40F locomotives. For this reason, as well as the adoption of HEP as the standard for passenger train heating and lighting, ultimately caused Amtrak to phase out the SDP40F, and adopt the F40PH as the standard diesel locomotive for both regional and long-distance service.

Amtrak wasn't the only rail company to see use of the locomotive; many commuter railroads, namely Metra, have selected it in order to modernize its fleet. All except GO still operate the F40PH. VIA Rail Canada bought 59 of these locomotives when they, too, adopted HEP as the standard for lighting and heating.

Many units were built, and most are still in service, either in their original versions or in rebuilt form. Amtrak rebuilt several into non-powered "Cabbage" cars (Control cab/baggage car, or NPCU), when their fleet of F40PHs were replaced by the more powerful and crash-resistant GE Genesis in the late 1990s. NPCU's can be identified from the standard F40PH by the lack of grills and rooftop fans as the baggage area has now replaced the standard engine room. NPCUs are commonly seen on Amtrak's "Downeaster" leading southbound trains, and are also seen on Amtrak's "Pere Marquette", "Wolverine", "Blue Water", "Cascades", "Pacific Surfliner", and "San Joaquin". Those NPCUs that operate on Cascades unlike the rest of the NPCUs, do not have a baggage area because the Talgo trains have their own dedicated baggage compartment. They do have a concrete weight to meet FRA standards because the "Cascades" train sets do not meet this requirement.

As of 2003, no F40PHs operate on Amtrak anymore. Some unaltered F40PHs remain unused, stored on Amtrak railroad property. F40PH 406 was removed from storage in 2011 after being dormant for almost 10 years. It was converted into an NPCU and was equipped with an HEP generator to provide power to the 40th Anniversary Exhibit Train. Unlike many NPCUs on Amtrak, this unit retains its original road number. It also resembles an F40PH externally, such as the rooftop fans on top of the locomotive.

Eight F40PHs remain stored on Amtrak property. These remain as true F40PH's; they were never converted to NPCU's. None remain in service and most other F40's owned by Amtrak have been sold or scrapped. The fate of the stored F40's is uncertain.

GO's F40PHs were not seen as the most successful locomotives in their fleet; the parasitic HEP system, unlike the GP40TC's separate system, reduced the power available to pull the train. While the F40PH may have fared better for Amtrak's shorter regionals, they were definitely not the best units for pulling 10 Hawker Siddely BiLevel cars fully loaded with commuters. The engine, which has to run at full power all the time, also proved unpopular with both crews and the residents near Willowbrook; the locomotive was not fuel efficient, and Willowbrook residents were not getting any sleep from the noise. Because of this, they were nicknamed "howlers".

All were retired by 1988, being replaced by the first F59PH order. All of them were sold to Amtrak.

It should be noted that unlike the later VIA locomotives, these were similar in every aspect to the Amtrak units, with the exception of the passenger-style pilot and the lack of a dynamic brake section. 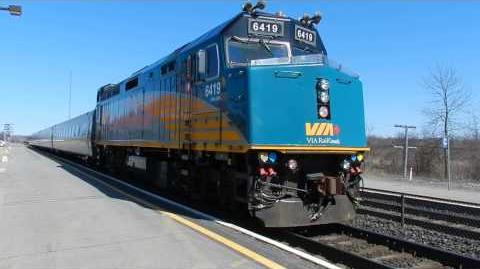 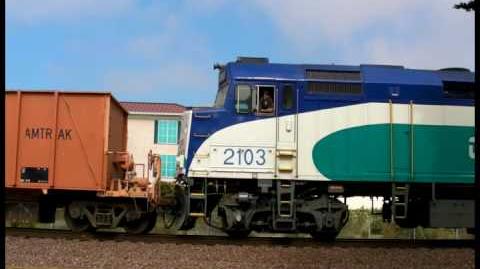